Right now I am spending my time in the capital city of Azerbaijan - Baku. The road from the border crossing with Georgia to Baku takes about 10 hours and we have successfully hitchhiked it with Pernille, my travel companion from Denmark, that I met in Tbilisi.
The first day we didn't find anything better then staying in a dodgy old soviet train station hotel. I guess that was one of the worst places I ever stayed in, I even had my hat stolen there. It wasn't cheap either (about 7 euro), but it seems like there are no better places for the same budget at all.
The next day was much better though. All 3 of us (me, Pernille and american guy Jordan, that was with us in Tbilisi too) where hosted by EVS volunteers, living here. Chichek, Carmen, Camile (french) and german girl Nina are working with kids here and ar just starting their second month out of 9 months program.
Baku itself is a huge city with skyline dotted by new glass and steel towers, streets are wide and neatly illuminated in the evenings.
Baku houses an old walled city, several mosques and some modern state-of-the-art parks, but still the feeling of this oil boom city is a bit depressive. Though there's not a lot of rubbish in the streets, in terms of air, sea and land pollution it is considered on of the most polluted cities in the world.
Rate of local currency manat is equal to euro and overall Baku is not a cheap city. But it has probably the cheapest metro in the world (5 qepek, same as 5 euro cents). Street food is mostly turkish style kebab, but it is also possible to find cheap Perashki or Qutab Bilinchiki (pancakes with various greens).
Here in Baku in just one day I got hassle-free visa to Iran for just 15 Euro, so tomorrow I will start my trip there. Wish me luck. 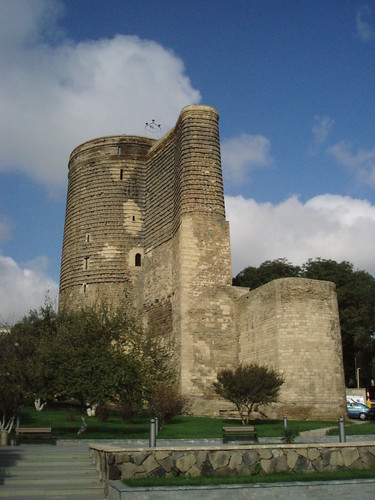